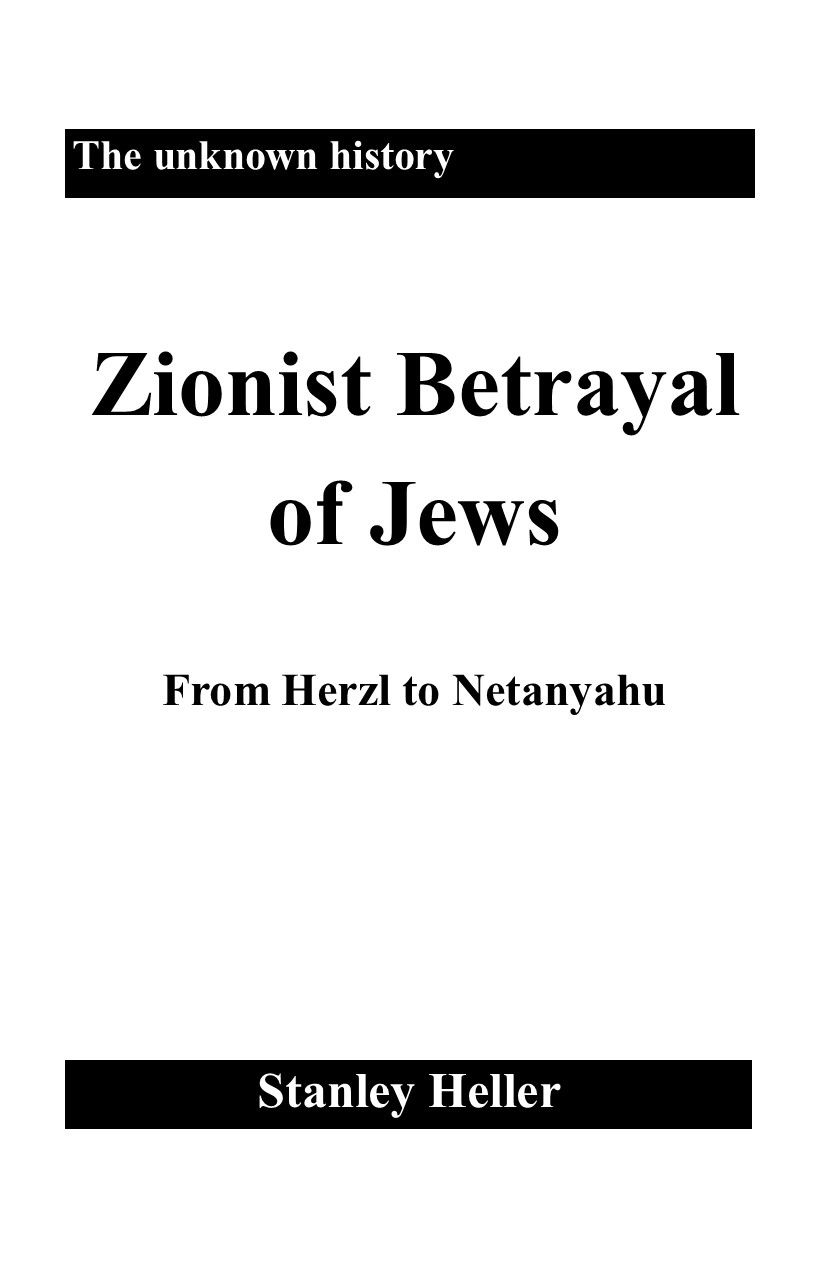 Zionist Betrayal of Jews - the Slideshow

Whether you've read the book or not I think you'll like to take part in a Zoom one hour event where I narrate a slide show I've made about the book.  It's made up of my short explanations of various pictures and of me reading passages from my book.  Have you ever seen the photo of Jewish Veterans of the Great War in a call for a boycott of Germany?  How about the one of the 100,000 anti-nazis marching in NYC in 1933? Do you know of the great man Samuel Untermeyer?  Have you seen the photo of the government that was threatening to remove all Jews from its land ... in 1976!  Do you know the Israeli who helped make hatred of Soros the modern equivalent of the age-old anti-Semitic myth of the Rothchilds?

I'd be happy to give the talk to groups of at least five people.  Q and A after my talk.  Write to me at stanley.heller@att.net

It will be mailed to you (in the U.S.) for donations of $13 to the Middle East Crisis Committee.  Send donation to my personal PayPal account (see below) and I will pass it on.

from the back cover:

Zionist Betrayal of Jews: From Herzl to Netanyahu

Inside you’ll read about:

· The first major act of appeasement to Hitler, the destruction of the international anti-Nazi boycott

· German Nazis that Israel employed after the war

· Netanyahu’s close relations with Trump who opened the floodgates to anti-Semitism and racism in the U.S.

What Others are Saying about "Zionist Betrayal of Jews"

"This is a very accessible and poignant critique on Zionism as an ideology and as a project on the ground in Palestine. Based on Zionist documents and sources and relying on recent scholarship, this is a crucial read for anyone wishing to question the allegation  that anti-Zionism is antisemitism. " Ilan Pappe, Professor of history and director of the European Centre for Palestine Studies at the University of Exeter.

"Jewish Palestine solidarity activist Stanley Heller’s  dynamite short book documents Zionism’s betrayal of Jewish morality exposing as it does their initial collaboration with Nazi Germany up to their current relations with anti-Semites and neofascists in Trump’s America.  By stripping Zionism of its moral authority it will help all of us fighting for the human rights of Palestinians against Zionism’s ongoing genocide. "  Michael Steven Smith, Esq.,  Co-host, Law and Disorder Radio, Author, “Lawyers for the Left”

"This is a superb text that provides a light in the fog of lies and distortions prevalent bin mainstream western media regarding Jews, Judaism, and Zionism. The message is made very clear with documentation: Zionism is an ideology that causes damage not only to its intended victims (native people of Palestine), but to Jewish ethics and values.  Stan Heller is someone best position to give this message not only because of his depth of his knowledge but because of his daily activism over the past four decades. Simply brilliant and a must read." Mazin Qumsiyeh, Professor and Director, Palestine Institute for Biodiversity and Sustainability, Bethlehem University

“Stanley Heller must be congratulated for his short but detailed history of Zionism‘s ties to anti-Semitism. Zionism’s founder, Theodore Herzl, got the support of the Russian Czarist pogrom murderer and Benjamin Netanyahu brought Hungary’s Victor Orbán to Israel as a guest. Orbán is devoted to the memory  of Miklós Horthy, Hitler’s crime partner. Read the book and see for yourself. Then you will recommend it to all your pals.” Lenni Brenner, author of Zionism in the Age of the Dictators and author or editor of 5 other books of history.

" Heller’s description of how Zionism has betrayed the Jews, from the days of its founder, Theodore Herzl to Netanyahu is a gripping one ."  Tony Greenstein Weekly Worker

I tried to give a source for everything I referred to that wasn't common knowledge.   Almost all of the sources are from the internet.  I favored Zionist sources and corporate papers for obvious reasons.  If you'd like to explore the linked sources there's no need to type in the long strings of letters and numbers.  Just click here for the End Notes page and click on the links. - Stanley Heller